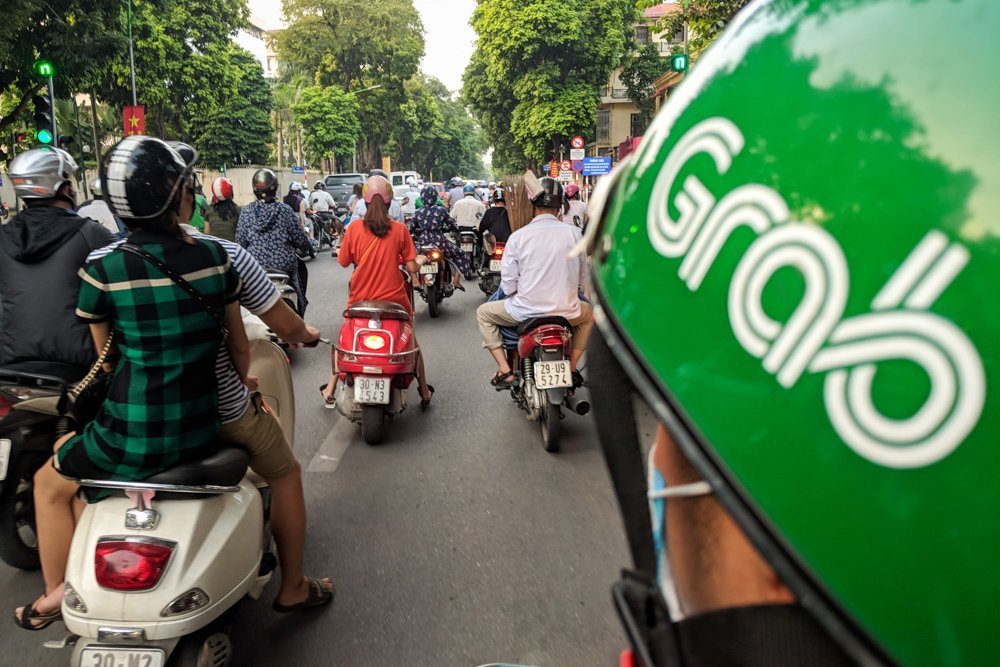 A lot of people ask us, “Is there Uber in Vietnam?” The short answer is no, but luckily, there is a fantastic alternative to Uber called “Grab”.

Essentially, Grab is the Uber of Vietnam and is arguably the best way to get around the larger cities like Ho Chi Minh, Danang, and Hanoi. Taxis in SE Asia are notoriously untrustworthy as they will rarely agree to put foreigners on the meter and quote outrageous prices.

I had a situation in Bangkok where I waited in a taxi line for 20 minutes and there were signs everywhere stating that the taxis in the queue were required to use the meter. Once I got into a taxi he drove about 100 yards and then quoted me a flat rate that was 4 times what it should have cost. When I told him to use the meter he forced me to get out and drove off.

I’ve never had any issues with Grab, aside from drivers canceling, but more on that below. Be sure that you verify the license plate before getting into a car!

You can download the Grab App on Apple’s App Store or on Google’s Play Store.

Why Choose Grab over Taxis

As previously mentioned, Grab is the Uber of SE Asia. So you’ll need to download the Grab app on your phone and then input your pick-up and drop-off location. You’ll be quoted a price for the ride and you can see when the driver is on the way and how far away they are.

One of the many benefits of taking a Grab over a taxi is that you won’t have to try to explain where you are going to someone who speaks minimal English (assuming you don’t speak Vietnamese). Another is that you know the price ahead of time and don’t have to worry about haggling.

And finally, since Grab tracks your location and has an “emergency” function in the app, you are less likely to be the victim of a crime or scam. You can also avoid being taken on a longer route in an effort to increase the meter.

As with Uber, you can choose the size of Grab car that picks you up. But unlike Uber, you’ll also have the option to choose a “Grab Bike” if you are a solo traveler.

If you choose the Grab Bike option you’ll generally pay about half as much as you would in a car, but you’ll have to ride on the back of a motorbike. Traveling via Grab Bike in Vietnam can be both a fun and terrifying experience depending on your level of comfort on a motorbike and your Grab Bike driver’s level of recklessness.

Vietnam has very strict helmet laws so your Grab Bike driver will always have an extra helmet for you to wear during your trip.

The Downside of Grab

The only downside that I’ve ever experienced with Grab is the frequency with which drivers cancel trips. Or they don’t cancel and just driver further and further away, expecting you to cancel the trip and be penalized.

It seems that drivers must accept rides without seeing the pick-up or drop-off locations so if they realize that you are too far away or that the trip is too short, they don’t find it worth their time.

There have been times that so many Grab drivers canceled in a row, we just decided to walk.

Also, be aware it can be very difficult to find drivers when it is raining out since they are in such high demand. During rainstorms expect to pay a bit more for your Grab ride and don’t be surprised if you have to request a driver a couple of times in the Grab App before finding one.

If you take a short Uber ride in the US, you’ll have to pay the minimum fare. This amount varies from city to city but is generally around $5 USD. Grab has no minimum fare and it’s rare that you’ll pay more than a few dollars to go anywhere in the city, especially if you take a Grab Bike. Just this morning I took a 20-minute Grab Bike ride that cost me 40k VND (~$1.75 USD).

When you download the Grab app, the default setting is to pay cash per ride. So you’ll see the price that you owe the app but will have to pay in cash. We would highly recommend adding your credit card number so you don’t have to worry about having the correct change.

Because the rides are so cheap and wages are so low in Vietnam, we sometimes give a small tip at the end of shorter rides.

Once the ride is complete you can open the app and rate your driver from 1-5 stars. The next page will ask if you’d like to add a tip and your options are 10k, 15k, or 20k VND (all of those are under $1 USD).

You shouldn’t feel like tipping is necessary with Grab, but it’s easy to do and will make your driver very happy!

Get the Grab App

You can download the Grab App on Apple’s App Store or on Google’s Play Store.

Val is one half of the Wandering Wheatleys. You can read more of her writing at WanderingWheatleys.com. 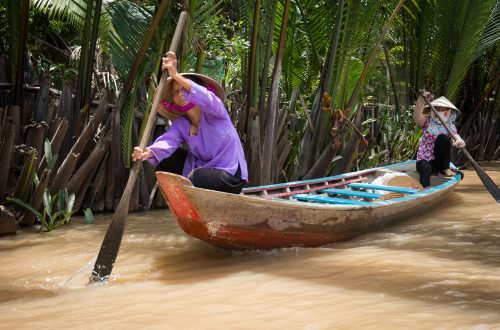